Chat with us, powered by LiveChat

Cloud limits and your needs

Popular clouds like Amazon AWS and Microsoft Azure are console based orchestrators, enabling people to spin and administer the needed infrastructure themselves. They also come with a variety of features and add-ons, making the end solution very attractive.

Quite often, due to their scalability, these clouds appear like a massive computing resource, where performance limits are hard to reach.

The storage story: capacity and IO, these two are “not very good friends”

When it comes to storage, there will always be a concern that IO will be exhausted before space. From a business perspective, this will result in a waste of resources. Due to the automation introduced by the cloud consoles and the power the customers have to provision at will, if left without rules and caps, the entire environment will become oversubscribed with degraded performance as a result, leaving cloud providers struggling to deliver the IO without adding more unused capacity.

It is either the IOPS count or throughput that kills the storage. The throughput, if the storage is network based and not local, will also affect the network switches requiring fast switches with big buffers when throughput increases and bursts.

How far can you actually go into popular clouds like Amazon and Azure?

In the case of Azure, this document states the following:

with Premium Storage, your applications can have up to 64 TB of storage per VM and achieve 80,000 IOPS (input/output operations per second) per VM and 2000 MB per second disk throughput per VM with extremely low latencies for read operations

Cache-hits are not limited by the allocated IOPS/Throughput of the disk. That is, when you use a data disk with a Read-Only cache setting on a DS-series VM or GS-series VM, Reads that are served from the cache are not subject to Premium Storage disk limits. Hence you could get very high throughput from a disk if the workload is predominantly Reads. Note, that cache is subject to separate IOPS/Throughput limits at VM level based on the VM size. DS-series VMs have roughly 4000 IOPS and 33 MB/sec per core for cache and local SSD IOs.

So Azure actually place IO limits based on disk size and also conditions them based on VM size (like cores per cache hits).

If you continue down the page, you will see that in actual fact, a single disk performance is much lower, especially when the disk size is low, because they even limit throughput on performance SSDs. And things become somewhat complicated, especially if your priority is just having your application up and running in the cloud.

Azure associates an IOPS with a 256 block size, which is good as this is a rather large block IO, so if your SQL does 64KB block IO, it will not actually divide your IOPS limit.

The situation is somewhat similar with Amazon, if we look at their stats. Amazon appears to be better equipped to combine performance and space, compared with Azure. 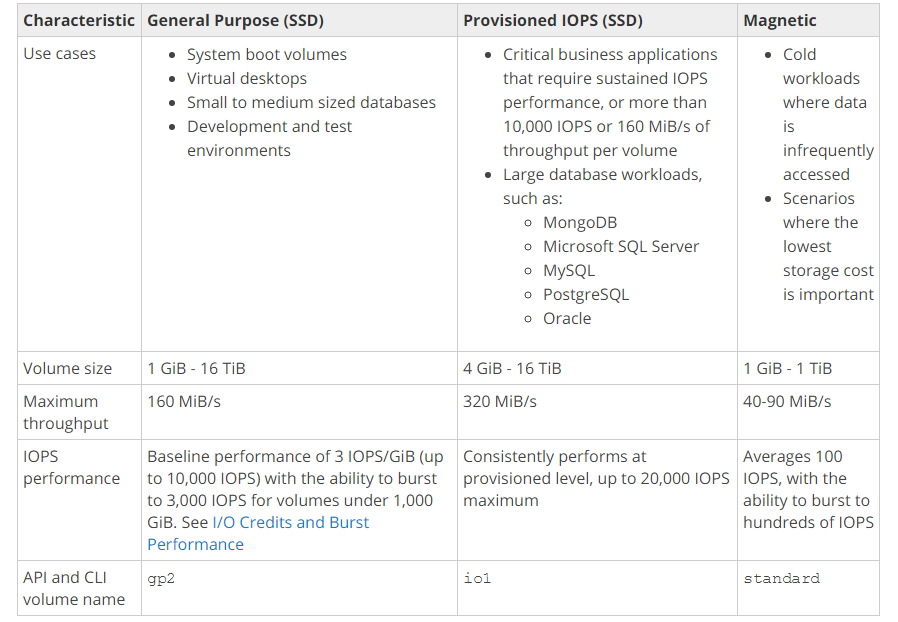 A Provisioned IOPS (SSD) volume can range in size from 4 GiB to 16 TiB and you can provision up to 20,000 IOPS per volume. The ratio of IOPS provisioned to the volume size requested can be a maximum of 30; for example, a volume with 3,000 IOPS must be at least 100 GiB.

Magnetic volumes provide the lowest cost per gigabyte of all EBS volume types and these volumes deliver approximately 100 IOPS on average, with burst capability of up to hundreds of IOPS, and they can range in size from 1 GiB to 1 TiB.

You can stripe multiple volumes together in a RAID configuration for larger size and greater performance.

Provisioned IOPS (SSD) volumes have a throughput limit range of 256 KiB for each IOPS provisioned, up to a maximum of 320 MiB/s (at 1,280 IOPS).

So with Amazon you get a somewhat better performance per disk size.

How does Webhosting.net deal with these limits when customers want more IO from less provisioned storage capacity and certain VM specs?

Our cloud has standard caps as well. For example we soft-cap at 1000 or 2000 IOPS per 100GB disk for regular VPS’s. IO limits are also dependent on the number of cores and vRAM subscriptions.

Webhosting.net is flexible and we work with our customers to help them configure and achieve the needed performance levels for their virtual servers and application(s). Our goal is to provide the customer the best possible experience and service, so that we retain the customer for the longest period and help them grow.

Below we have two different, what we call, medium performance 8 cores/12GB RAM SQL virtual servers, each has a rather small data disk, approx 300GB. These SQL servers are hard on reads, and are IO throughput hungry with 64k blocks IO. They look somewhat similar, with a small difference – one is harder on throughput and the other somewhat harder on IOPS.

Both VMs are capped.

But in this case, capping was done by working with the customer ensuring that his VMs do not bottleneck and they do not exceed the budget by oversizing them. We do not throttle the burst by time and the VMs are able to max out as long as needed to their configured limit.

Also the cap is global, so it’s predictable; when the customer has random IO, the same high cap will apply, without needing the application. A similar situation will occur on Azure where cache hits have higher caps, compared to IO going to disk.

We also analyzed the IO block size pattern of the customer and set the IOPS cap based on this, rather than on a generic IO block size applying to all VPS.

What’s interesting about the two VMs is that the IOPS are not very high, it’s the throughput that’s high and they both burst aggressively. Such VMs are usually trouble makers for a service provider as they put strain on both the SAN and the network, especially with the random and high throughput IO bursts.

For example on one cluster of ours, Pernix saved quite a few resources from the SAN and network.

So essentially what we did, was to provide the customer with performance at a desired space usage, without forcing them to use X space for Y IO and high end expensive SSDs or a certain amount of cores or RAM. The customer did not have to figure out their IO patterns and do the calculations themselves, we did all of this for them by looking at the application performance and latency on the backend).

If we look at Amazon and Azure:

One key thing within a cloud compared to a dedicated physical deployment, is the ability to hot-add extra resources, for example increasing the number of CPU cores or amount of RAM or by increasing disk size.

For example, the application starts to put load on the CPU and extra cores are needed immediately. If the OS supports this, and many OS currently do, webhosting.net can add more cores, memory or increase the disk size on the fly without requiring a shutdown or reboot, which would typically bring down applications which are required to be always up, and prevent any downtime.

For example Azure currently does not have or plans to have the CPU or memory hot add capability capability according to their site.

On a regular day at Webhosting.net, a customer calls saying that for various reasons he lost important files or his VPS has issues resulting in a request for a restoration of the machine.

On various clouds, customers are responsible for their own backups. But sometimes, they may not have a backup available or in fact their backups have been compromised.

Apart from actually helping the customer to backup their applications and virtual servers, there is a little extra service we offer. We can help restore files from our own snapshot backups, provided this is in our backup restore points, even if the customer has not subscribed to a backup service. Many times we have restored accidentally deleted files or compromised virtual servers for customers who saw no value in having a backup plan to start with.

Remember the Cloud Space misfortune where an attacker took control of their Amazon account and deleted all their stuff including their backups, even when they were relatively fast to react? Well, we could have restored pretty much all of their data in a matter of minutes, from our own backups.

Summing it up, your tailored cloud solution

By combining VMware, high performance storage and low latency networking along with Pernix acceleration, Webhosting.net’s VMware cloud offering can take massive loads of IO, serving those directly from local host SSDs and increase the limits of the IO per capacity.

The result is that if needed, we offer more IO and throughput from a smaller sized VM without forcing the customer to overpay for an oversized virtual server.

Every cloud solution has its limits. Webhosting.net works with its customers on a continuous basis to find the best balance of budget and performance.

Learn more about our customized cloud solutions and how we can work with you to determine the best fit for your business.